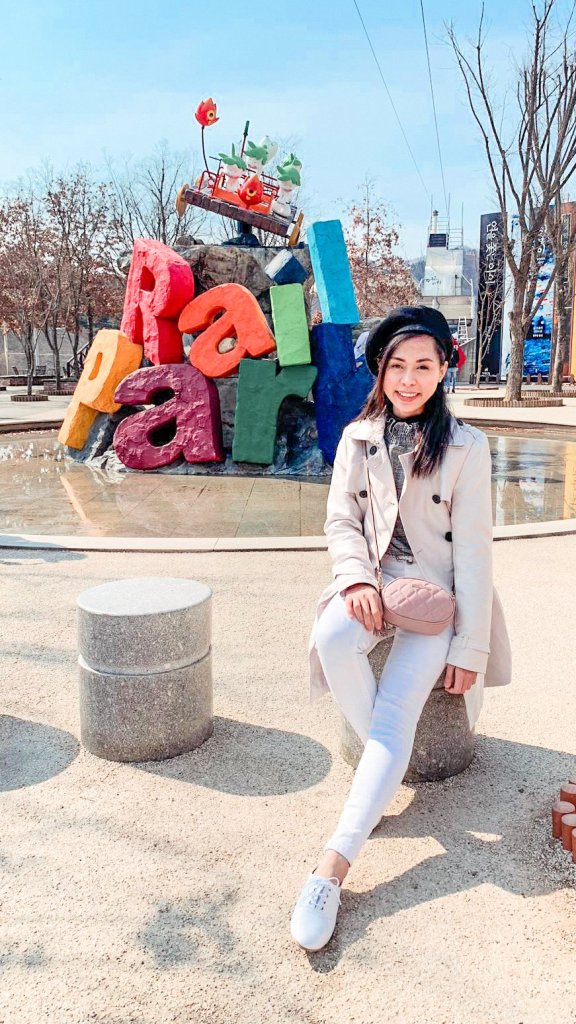 A lookbook on the 9 different outfits I wore in Korea and a roundup of everything I did in my 10 day holiday there!

Last month, I had the loveliest of times in South Korea, a country which I have been wanting to go to for years now. Months prior to our vacation there, my friend and I listed down all the places we wanted to visit. Our schedule per day was jam-packed that we needed to leave our hotel early and came back late but despite that, there were still places we failed to go to due to time constraints but we didn’t fret as we are now planning our next trip there!

We arrived midday in Incheon Airport. We booked a pickup service from the airport to our hotel a week prior to the day of our departure so transportation wouldn’t be a problem. Our hotel was in Hongdae which meant I was close to my favorite Korean fashion brands. We got to our hotel earlier than the check in time so we just left our luggage there and walked around the area. If you have seen my Instagram stories, you may have known that I got myself to shop some stuff already even before we got to check in our hotel. We travelled to Insadong, after checking in and changing into something else, and went around Ssamziegil, a mall complex in Insadong filled with crafty hanji paper and beautifully painted mural lined walls. We dropped by our first café there which was O’sulloc, a green tea café, since I love my matcha so much.

I wore this pastel color block jumper from H&M, a pair of jeans and white leather chucks, finished everything with my favorite suede blush jacket from ASOS, my favorite pink belt/bum/body bag from Aldo and this white cap from Jeunesse. 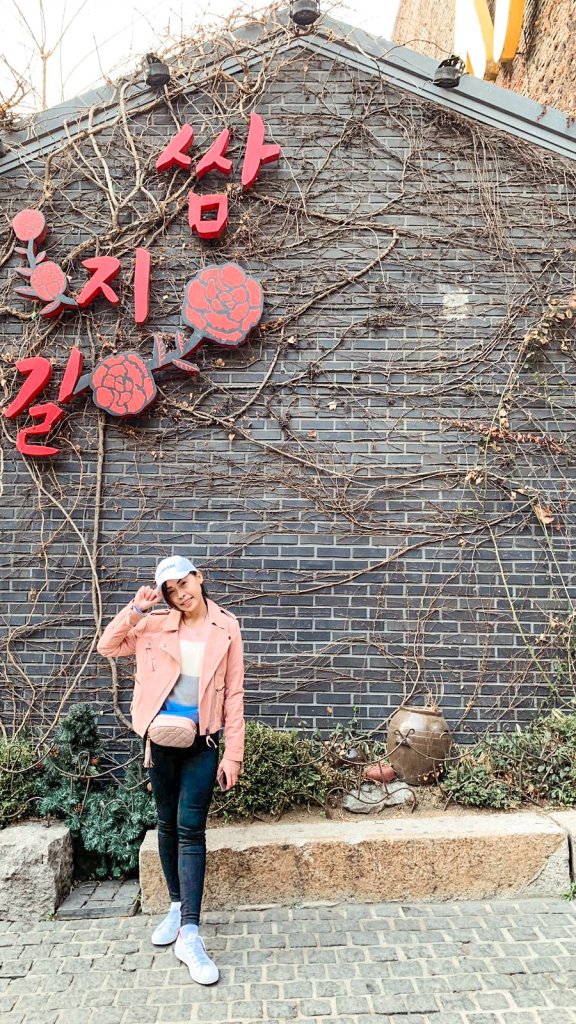 On our second day, we had a countryside getaway. We travelled by coach to different tourist spots, which are also famous filming sites of different popular Korean dramas. The first stop was, Rail Bike Park in Gangchon. We tried the rail bikes ourselves and it wasn’t easy as expected since the track was quite long but the view was beautiful. The 2nd stop was Nami Island in Gangwon Province which was made famous by the Korean drama, Winter Sonata. We even tried to reenact some of the famous scenes from that drama. The 3rd stop was the very pretty village of Petite France in Gyeonggi Province. It was also popularized by the Korean drama, My Love from the Star. Our fourth and last stop was the gorgeous Garden of the Morning Calm. They had a light festival which was breathtaking, I honestly didn’t want to leave the place.

For a day in the countryside, I wanted to be warm but still look nice so I wore my black and white check top from The Flower Season, a pair of white Chuu jeans and a pair white Oxfords which I got from Yesstyle. I also wore my favorite trench coat from Superdry and accessorized with a black beret and pink bag, both from Aldo.

We went around Seoul for the next couple of days of our holiday. We had our first morning coffee run on our third day and continued on the next coming of days there.  After having a dose of caffeine, we went to a hanbok shop as we rented some hanboks to wear in Gyeongbokgung Palace. You’ll be given free admission to the palace if you’re wearing a hanbok! We were actually given 2.5 hours to wear the hanbok but we just wore them for an hour since we were already able to go around the palace and take lots of pictures. We then changed into our own clothes and walked around Bukchon Hanok village which was really close to the hanbok shop. We dropped by Duksung Women’s University for a few minutes, it is known for the drama, Goblin. We then headed back to Hongdae and had late lunch at Mom’s Kitchen. It rained that day so going around wasn’t really a good choice. Lastly, we had our hair done by a legit hairstylist who is own to style famous Korean artists and influencer. (Fun fact: We thought we were the last customers as we finished late but it turned out that the salon had a special guest. Clue? He is a famous Korean hiphop artist!)

I wanted to wear a skirt so I wore this black and white check skirt and paired it with a yellow jumper from Somedays which I got on our first day in Seoul. Luckily, I had my thermals on that day since it was surprisingly colder. I finished everything with a few accessories, my black leather jacket, black boots, pink bag and my favorite baker boy hat. 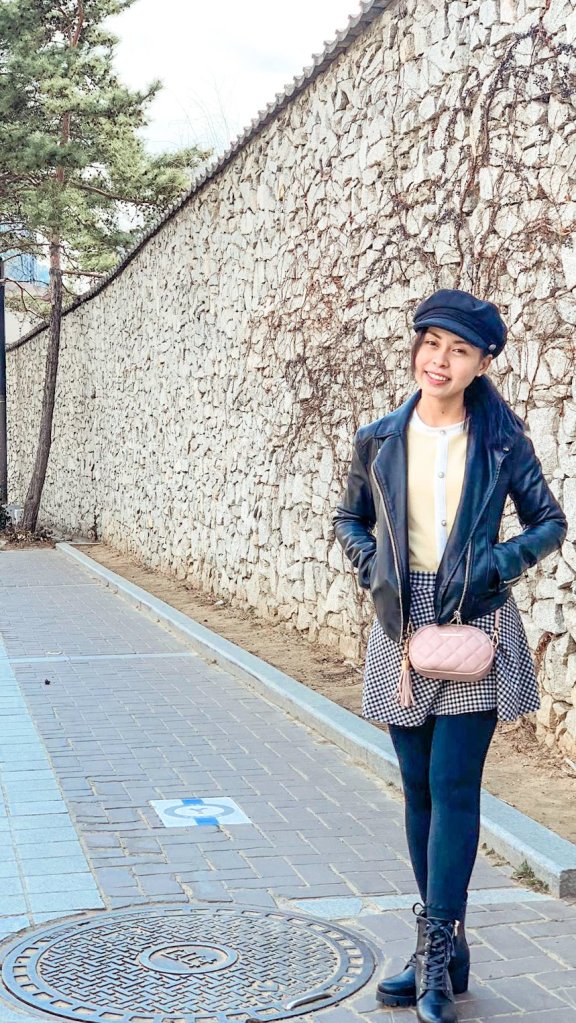 On a Saturday in South Korea, we went around to see the beautiful Seoul skyline in N Seoul Tower but before that, we walked around Ihwa Mural Village to appreciate how creative the people from South Korea are. After spending the day in N Seoul Tower and Hello Kitty Island, we then travelled from Yongin to Jamsil just to have dinner at Ossu Seiromushi which is BTS Jin and his brother’s restaurant. The food was really good there. The travel was worth it. Also, we expected that we would be waiting for a long time to have a table but it wasn’t that long. The service was really good too.

I wore this cute striped jumper from H&M and paired it with these trousers which are also from H&M. I wanted to be in pink because I wanted to match with Hello Kitty (who is my spirit animal. LOL!) so I wore my pink suede jacket. I got these cute sunglasses from a vintage shop we passed by on our way to Ihwa Mural Village. 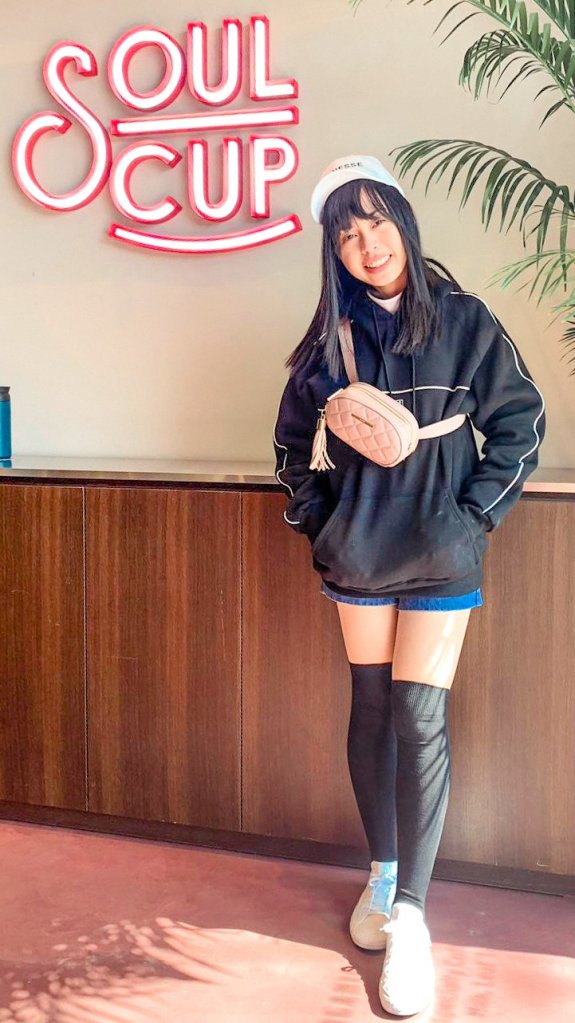 My friend and I decided to dedicate a day just for Hallyu since we are avid fangirls like that. It was during our 5th day in Seoul. We travelled around to see the different entertainment buildings, from YG which was in Mapogu to JYP which was in the Olympic Park area. We had some coffee at JYP Soul Cup before getting on our feet and on the subway to Gangnam to go to Starship Entertainment in Starhill building, then to BigHit which was not that easy to find. We lost our way a bit heading to both buildings as the addresses were different on the navigation maps we were using but still eventually found them. Our last stop was SM Entertainment Studio Center. While walking our way there we passed by the cute Gangnamdols and FNC Entertainment and sighted some idols (Yes, as I said on my Instagram, we saw a few members of the boy group SF9 which we didn’t even realize until after we saw them!). We looked around the area as it was still a bit early and went to the Apgujeong Graffiti Tunnel. We paused for a bit to breathe some fresh air by the Han River. To cap the day off, we had some pizza for dinner at Laundry Pizza which is known for being a photoshoot location for different idol groups like BTS and Apink.

For this day, I tried out street fashion which I hoped I was able to pull off. I wore this Jeunesse hoodie which was very warm, paired it with these shorts from Chuu and finished everything with knee high socks, my white chucks and white Jeunesse cap. (Fun fact: This hoodie was seen worn by TWICE’s Mina and this cap was seen worn by TWICE’s Tzuyu both for their airport fashion. These were my inspirations for this outfit.)

Our 6th day was a whole day spent in the happiest place in South Korea, Everland! I loved it there. I actually felt like a little girl again. It was huge and had a lot of attractions. I loved the amusement park and the zoo too.

I went back to my girly but comfy style. I wore this beige top from Chuu, paired with these black trousers and kept myself warm with my favorite trenchcoat. 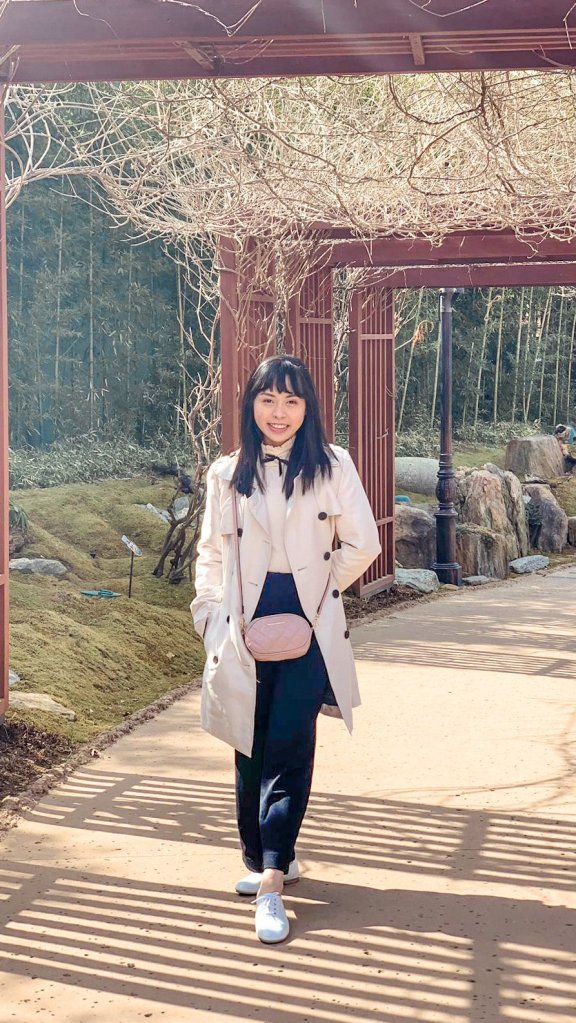 On our 7th day in South Korea, we travelled to Jamsil. We went up the Lotte World Tower Seoul Sky and had an amazing view of Seoul from 486 metres high up above the tower. We then had the rest of the day at Lotte World because one amusement park isn’t enough when you’re in South Korea. It was an indoor amusement park but had great facilities and attractions. I loved the carousel. When it got darker, we went to Dongdaemun Design Plaza and got to see a few models who were having pictorials there, which we also did a bit of pictorial too (Lol!). It was time to chill at CHAN by Hikoco, known to be EXO Chanyeol’s father’s restaurant (we even heard him sing a few songs for the customers). We ended the day with another dose of caffeine at a coffee shop near our hotel. (I’ll be revealing all these cafés and coffee shops in another post soon.)

I again wanted to be all girly but still comfortable for a day in Lotte World so I wore this floral top from The Flower Season and paired it with pink Chuu jeans. I finished everything with my trenchcoat, pink bag and white Oxfords.

We couldn’t believe how time flew by so fast while we were in South Korea. We only had 3 days left for our vacation but we didn’t want it to end. We went first to Starfield Coex Mall then to SMTown CoexArtium to see the SM museum. We also had some drinks at the SUM café. One café is not enough when you’re in Seoul so we also had some waffles at Kamong Café, also known as EXO Kai’s sister’s café. We went to Garosugil and dropped by the flagship Line Store there and had our nth cup of coffee at the Line Friends Café.

We knew that it would rain that day so I tried to dress for the weather. I had a black turtleneck flare sleeved jumper under a pink cami, completed the look with a pair of blue distressed jeans, black leather jacket and black lace up boots. I also accessorized a bit with a black and white check baker boy cap which I got from one of those vintage shops in Hongdae.

Our 2nd to the last day in Seoul meant more shopping but first, we had our morning coffee run at &Gather Café in Yongsan. We then went on the subway and spent a day of shopping in Myeongdong. We first dropped by Star Avenue before all the shopping commenced. Yes, your girl had quite a good time shopping all those kbeauty stuff. We were able to visit 2 more cafés too, the Stylenanda Pink Pool Café and the Innisfree Green Café.

On this day, I wore a pink front tie jumper from H&M, paired it with a pair of black trousers and topped everything with my pink jacket.

We didn’t really do anything on our last day and just reserved it for catching up with sleep and preparing to go fly back to London, even when we didn’t want our vacation to end. (You can see more photos of my vacation on my Instagram! Please do follow me there too.)

This is the second entry to my 5 part South Korea series and since it has been really long since I posted something fashion related, I decided to do a lookbook, though I had second thoughts of doing one but I thought it would be nice as I could also tell you what I did during my vacation. Now, I’m looking forward to my next visit there. Please look forward to the next 3 parts of my South Korea series too.